Currently, I have no desire whatsoever to freeze in a draughty beer garden, or even to cram myself into a Covidy department store with hundreds of others. Why do our dear leaders and the mass media think that all we want to do is shop, drink beer in pubs or go to football matches? But leaving aside the usual levels of Covid frothing and foaming, other events of the last few days have made Battleaxe despair. We are seeing this country at its very worst.

Where to start. Not down the pub, for sure. Have seen far too many beer gardens on telly already. Whiskery geezers, braying youth, overexcited women with pink hair clutching pints.  Also, hordes of screaming girls brandishing Primark bags… Philosopher asked why we couldn’t be shown people requesting books in  a newly opened library. Anyway, here’s a more peaceful photo from the Country Park – see later.

Well, on Friday the Duke of Edinburgh died, aged 99. The country seems to be polarised between those who are gleefully slagging him off on social media as a racist, fascist parasite who is better off dead along with the rest of his worthless family,  and those who are incensed because Gogglebox was shown on Channel 4 on Friday night when all channels, not just the Beeb, should have been shut down out of respect.

What does Battleaxe think?  Well, for a start, slagging off someone who has just died is plain wrong and unnecessary. Nevertheless, even though the man has been around for all my conscious life, he didn’t mean much to me.  None of the royal family do, except I do think the Queen is a trooper.  Overall, I think us obnoxious Brits are probably better off with a head of state who is above politics. But just think about it, who on earth would we have as President? Tony Blair? John Major? Lady Hale? David Attenborough? David Beckham? How would we appoint/elect him or her? The mind just boggles, and it might mean we need some sort of monarchy.

Unfortunately, leaving aside the Queen – and heaven preserve us from the fuss there will be when she dies – our royals are a dismal crew – over-privileged, over-paid, conservative with a small and large C, hidebound, rigid-thinking, not very intelligent and personally unattractive. Charles has very few redeeming features, Wills and Kate are a bit better but desperately dull… and what on earth possessed them to let that vile sleazeball Andrew do interviews on national telly? What were they thinking?

Battleaxe is torn about the whole royalty business. Partly, I think if you are going to have a monarchy you may as well do it in style, down to the last royal train and open landau. Us Brits do the pomp and circumstance stuff so well, and one does like a nice parade. Or maybe we should have a democratised Scandi-style monarchy, all cut-price clean lines and IKEA. But  would we actually want to bump into the Queen shopping in Morrisons?  I understand those modernised Euro-royals are very popular with their people, but then those Scandis, never mind the Dutch, are so much more civilised than us.

Here are the young Norwegian, Swedish, Danish and Luxembourg royals enjoying a jolly day out with the kids in 2020. How attractive and relaxed they all look – and so cool. And look, the Beeb needn’t have cancelled all the telly on Friday.  I gather they got 100,000 complaints about it.  But they can’t win. Apparently when the Queen Mother died (thank goodness we were on holiday) they got zillions of complaints for not being sufficiently reverential with their coverage. Battleaxe says thank god for Netflix.

Next, it was the Grand National on Saturday.  More popularist polarisation here  – between those who think that the horses are cruelly treated as disposable commodities and would see all horse-racing banned forthwith, and those who think those lucky, lucky, much-loved horses enjoy every minute of it and are treated like royalty. Battleaxe doesn’t find this issue clear-cut either. (Btw it was good to see a woman jockey win – well done Rachael Blackmore. I used to love National Velvet when I was little – dreamed of riding in the race myself).

Before we get onto the horse issue, the worst thing for Battleaxe about that race appears in the picture below. Randox. Yes, the genuinely corrupt links between those Tories and the horse-racing world. Randox stands for dodgy test kits, overpriced contracts awarded without competition – and let’s not forget Dido, Queen of Carnage.  The country seems largely oblivious to the levels of corruption in the current government. I see that nasty shiny-faced little weasel Cameron has ‘Broken his silence’ on the Greensill business and acknowledged it might have not been a good idea to use his connections to secure contracts for the soon-to-fail Greensill, but nobody seems to much care one way or another… just stick a pic of people in a beer garden on the front page and we’ll soon forget about it. 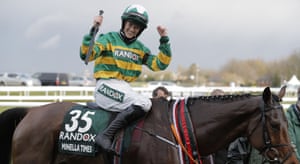 OK, horses. If you didn’t have horse-racing, countless horses would have to be destroyed. Horses get killed in all sorts of contexts – increasingly, from road accidents from motorists who are too selfish to slow down to let riders pass safely. But, in the racing world, many horses do indeed suffer painful deaths. See this website – Horsedeathwatch – for the statistics. Despite lowering the Aintree fences over the years, that course is still dangerous.  What do the horses reckon to it? Well, I think when they are actually running in a race, they are caught up in it, and just think about running – anyone who has ridden with a group of others and found themselves somehow in a headlong thundering rush where your goddam horse seems oblivious to any attempt to stop it (and it happened plenty to Battleaxe) can see that. When riders fall off and their horses run on with the field, the horses don’t do it because they enjoy it, they do it because they are herd animals and that is what herd animals do. They’ll even try to run with a broken leg.

However, the horses will feel fear when they fall and horrible pain from their injuries, and they certainly feel the pain of the whip. Do the masses care enough to improve animal welfare? I doubt it…. let’s have a flutter on the National, and why not go out and get a nice little fur-baby doggie to keep us company during lockdown, let it shit on the pavement, let it off the lead to attack a few sheep and then abandon it when we have to go back to work. And oh, let’s go to Lidl and get the cheap pork and chicken, never mind the vile conditions the animals might have been raised in.

And so we arrive in Belfast, where there is violence night after night, strangely under-reported by the media. 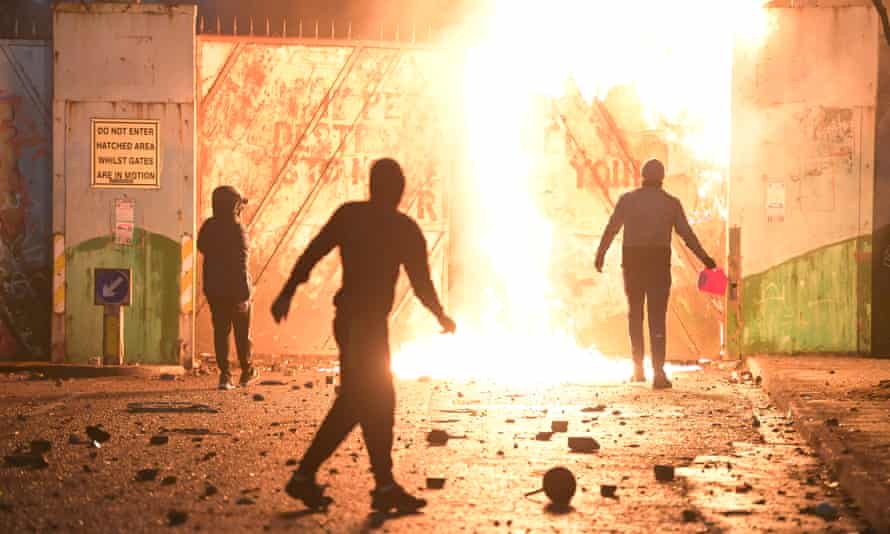 Let’s be straight up and honest here. Battleaxe vowed not to refer to the B word after B day, and I have kept to it until now.  Look, I have little sympathy for Northern Irish loyalists, but of course they feel let down and betrayed by the BREXIT AGREEMENT. Yes, that border in the Irish Sea. And what about the nationalists? Why would they not feel cut off from their bretheren across the border, who are still in the EU?  This article by Jonathan Freedland puts it very well. Boris Johnson did not care about Northern Ireland in the slightest, he just railroaded Brexit through, and now we are reaping the consequences. Does the media tell us this? Only in the tiny print, if at all. The only way to preserve the peace in Ireland would have been to stay in the EU, but of course it was sacrificed purely to fuel the Brexiteer’s ego.

Snow?  Yes.  The weather is totally unseasonal.   This time last year we were in the Country Park, in tee shirts and sun hats, admiring the bluebells and wild garlic.  This time, no garlic to be seen, just a few bluebells in bud, wearing winter coats and scarves… it doesn’t improve Battleaxe’s mood.