Yes, the Suez Canal is massive, global news at the moment, with a huge container ship wedged across it. It has now been stuck for five days, causing massive disruption. This photo below, with the massive ship’s hull and the tiny digger, has gone viral across the world. Battleaxe remembers our journey down the canal, on our first – and probably our last – cruise in November 2016.  I guess it was a more eventful voyage than passengers would normally anticipate, with threats of terrorists and pirates combining with truly bizarre weather. Ours was the first transit of the Suez Canal by a cruise ship for several years, due to attacks on tourists in Egypt. Little did we know it, it was also our ship’s last ever outing. The company, Voyages of Discovery/Swan Hellenic, went bankrupt just a few weeks after we disembarked, and at the time we travelled, was already in terminally severe financial trouble.

We hadn’t really intended to go on this cruise at all – had originally booked to go to the Black Sea, but that was cancelled due to the political situation, so the company offered us this one instead. Our ship, the Voyager, was quite small as far as cruise ships go, only 450 passengers. For us it was just the wrong size – big enough for us to dislike crowds doing stuff, but small enough to ensure we spent much time dodging dubious-looking people we encountered once and didn’t want to meet again… like the American Trump-supporting couple we met on the first night. She fingered me as a spooky double of her sister, and tried to seek us out for the rest of the trip…anyway, here is the blog post I wrote about this part of the voyage.

The company’s troubles must have started in Alexandria, where the Egyptian authorities insisted we travel everywhere on coaches escorted by armoured cars, bristling with heavily armed soldiers. We were not allowed out on our own, and the streets were cleared for our progress, which led to massive delays and grumbling passengers.   In Port Said, we were not allowed to leave the port area – once again, surrounded by armed guards.

We entered the Suez Canal at dawn, and many of us passengers were up early to view the scene.  First surprise, it was so quiet. We didn’t form part of a convoy for this part of the transit. The ship proceeded slowly and almost silently, under minimum power, escorted by a tug and a naval gunboat, both of which kept their distsance.

Next surprise, the contrast between the two banks. The West Bank of the canal is built-up, green, fertile land. Look at these ancient pigeon-lofts. The East, Sinai side is empty desert.

We went under a bridge…,

and lots of soldiers… some looking a bit sinister, like this lot, others rushed out of their guard-posts to wave at our whited sephulcre as it glided gracefully past – the first cruise-ship in several years.

At the centre of the canal is an open stretch of water called the Great Bitter Lake. Here, we became part of a convoy. I had got bored by this time and went to the gym. Here is our tug boat, viewed from the running belt.

It took us virtually all day to get through the canal. We passed Suez at tea-time, and overnight headed to Sharm-el-Sheik, where we encountered the next thrill of the voyage – a biblical tempest – ‘the worst storm in ten years!’ People talk about hail-stones the size of golf-balls – well, these actually were!

Then think floods at Petra and a journey down the Red Sea with the ship covered in razor wire, no lights after dark, ‘pirate attack’ drills for the passengers (if you want to know what to do if pirates attack your cruise ship, well, you lie down silently in a central corridor), and armed guards patrolling the decks…

No wonder the company went bust. I wonder what happened to the poor ship? Probably broken up on a Bangladeshi beach. And the crew – mostly Filipinos. Our cabin steward was a lovely man working long hours to put his daughter through university. What happened to him?

Here’s a final picture of the stuck mega-vessel. Looks like it is in the middle of a field. 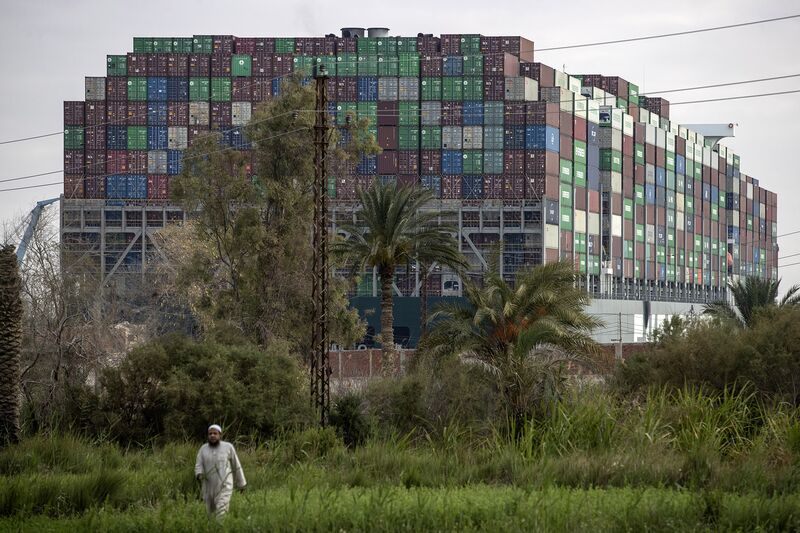