Theoretically, we are still on holiday – just home for a couple of days between trips. Digby is still in the cattery, and we are supposed to be having a quiet time – but the garden has burst forth into a tropical jungle, there is so much washing to do…. But we had a good week away, down to Torquay and then a couple of nights in Dorchester to visit the Hardy sites and sights. The weather was very changeable – only had one wet day, but sun came and went… Warning – this is a very long post!

We last went to Torquay in early 2019, on our way back from Cornwall.  Here is the post about it, which explains about my grandparents living there,  and why we stayed in Wellswood – I won’t cover the same ground again.  Well, we liked the Muntham Apartments so much we booked in again – I had scoured the country for a little cottage for us, without success, and thought of trying Torquay again – luckily they had five days free, in a lovely little apartment overlooking the garden (apartment 6 if you look at the website). The apartments have mostly been redone since we were last there, and are even more luxurious than before. Battleaxe would totally recommend.

Being in Torquay made me realise just how much of my early life was linked to the sea. We lived by the sea in Ireland, as did both sets of my grandparents – one lot in Torquay and my father’s mother on Hove seafront. No wonder Battleaxe wanted to come to Hastings. The Devon coast is very different to here – much greener, many more trees,  especially pine trees. There were some huge old ones in the garden outside our window – one night was very windy, and they sounded like the sea. Our first day away was wet, but the second day was the complete opposite – made one realise why that coast is called the English Riviera. We went on a long walk from the apartments, round a rocky coastal path, eventually ending up down in town. It was like Italy… blue sea, pine trees,  Italianate Victorian villas, rocks, flowers….

Many large cruise ships are anchored in Torbay, resting up due to the pandemic. The Queen Mary 2 was just down the road from us off Babbacombe, and another Cunard whopper, the Queen Victoria, was also visible, along with several other enormous ships. They appear in the background of virtually every photo!

I did briefly pop (puff) up the road to revisit my grandparents’ bungalow – looking a bit run down, I thought. I encountered the neighbours (Brummies!) who told me that the elderly man who lived there was now a widower, but had lived there for about 50 years. He had apparently told them that he bought the house from Brummies – must have been my grandparents!  Sadly, he wasn’t at home when I knocked on the door… the neighbours told me that the house was probably not that much changed.  See previous post (link above) for pictures.

One of my strongest memories is fishing for crabs off the harbour wall in Torquay with my grandfather, dangling bits of string off the side, with a piece of ?sausage tied on the end…. I don’t remember if we ever caught any, but I was delighted to discover people in exactly the same place, still doing exactly the same thing 60 years later!

One day we went on a very exciting trip – starting on the Dart Valley Railway from Paignton to Kingswear, then across on the ferry to Dartmouth, a boat up the Dart estuary as far as Totnes, and then bus back to Paignton. The trip, called the ‘Round Robin’, is booked all in one go… here is the link. It sounds a bit middle-aged but it was lots of fun – people of all sorts and ages. Battleaxe would totally recommend!  On the boat we sat by a very strange man – an Israeli who told us he was a journalist with the National Geographic magazine. Given that, he seemed remarkably ignorant about the location, sights and countryside and kept on asking us a continual barrage of questions. We wondered if he was a fabulist… I covered the rail journey in the 2019 post so won’t go there again, but here is Battleaxe standing by the engine.

However, had never been up the Dart, and neither had Philosopher. Unfortunately it was a bit of a dull day, but the scenery and treescapes are just beautiful. The estuary is much wider than I imagined, and very shallow. Our boat, which was quite large, was clearly at the limit of possibility, and had to tack back and forth across the water to find the navigable channel. As the tide was falling, its trip back to Dartmouth was the last of the day. The river narrowed approaching Totnes, which apparently was once a thriving port. Not now – our pleasure boat was the only larger-size visitor.

I had never been to Totnes either, but Philosopher knew it well – his first wife’s mother lived near there all her life. I was quite looking forward to seeing it, as it is supposed to be the Alternative/Green/New Age/Ethical capital of the UK, with a ban on chain stores/coffee shops etc. However,  forgive me local residents, but it was horrible. It was a warm summer afternoon, the town is basically one steep narrow High Street with skimpy pavements, choked with traffic toiling up the hill. It was packed – heaving… Now look, if the place is that green why on earth don’t they pedestrianise that High Street? Endless cramped touristy knick-nack shops, lots of (admittedly very good) charity shops… twee crafty stuff… wholefood… not much else…

The next day, we went on another exciting trip – on the ferry from Torquay to Brixham, another thing we had never done. We had fish and chips in Brixham, and a quick mosey round before catching the boat back – the weather changed suddenly and remarkably! However, we both liked Brixham – felt it had real character,  and it is clearly a serious working fishing port.

So, off to Dorchester, stopping for a beach break at West Bay (aka Broadchurch) on the way – our one beach visit!

Had booked us into the Premier Inn – turned out it was in the very chic newly built Brewery Square complex, on the site of the old Eldridge Pope Brewery.  There were many fancy shops and restaurants nearby including a branch of Côte – we ended up with the very good value prix fixe two nights running! However, the room they gave us at the hotel was horrible – dark, bleak and scruffy, with the view from the window largely obscured by the corner of a building. When we opened the window, nasty cooking smells came in. Very unlike our usual Premier Inn experience. Still, we were not in there long. 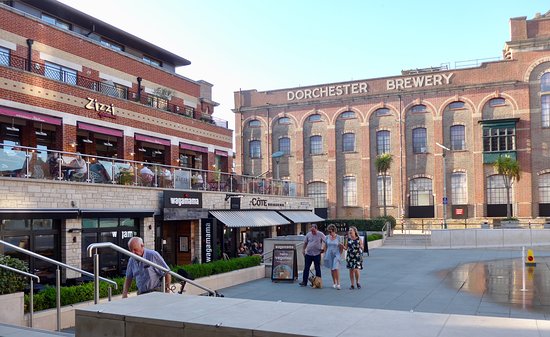 We visited two Hardy sites – first, his house, Max Gate, on the outskirts of Dorchester. Although Hardy had trained as an architect and designed the house himself – we were told he loved light and space – the house was gloomy and awkward. It didn’t feel a comfortable or happy house – we were told that it had been built on an ancient henge site, bronze age burials etc… Battleaxe does have slight superstitions when it comes to how places feel, and Max Gate did not feel good. We felt sorry for Emma, Hardy’s first wife, who eventually retreated to two very poky rooms in the attic, while her place at Hardy’s side was usurped by the ambitious and much younger Florence, his second wife.  Still, it was interesting to visit, event though one did not get a great sense of Hardy the person from the house or the garden.

We were told that the contents of his study had been left to the Dorset County Museum, so we yomped back into town to find it. Horror of horrors, they tried to charge us £15 each for entry. No concessions for oldsters, either. Well, we were not going to cough up £30 for the two of us. They tried to tell us we would be buying an ‘annual pass’ but what good is that? I left them a stinky review on Tripadviser – what with that and the stinky review I also left for the Premier Inn, they won’t ever want us back again!

Next day, we visited Hardy’s birthplace and where he spent his younger days – a cottage in the woods on  the way out of Dorchester. That was much better. The woods were really beautiful, and there was a good Visitor Centre with a cafe. The cottage itself was very picturesque, but again you didn’t get much idea of how Hardy actually lived. It must have been a squash in there – him, his parents, two sisters and a brother all crammed into a really small space.

Dorchester felt a bit high-Tory/genteel – very clean and neat, not quite real life… I don’t suppose we’ll ever go again. On the way back we stopped for sandwich in a very pretty part of the New Forest – Rufus Stone. Philosopher hadn’t realised it was a real stone put up to commemmorate the death of William II (Rufus) – he thought it was just something to do with some local bloke…

We were exhausted when we got home… not surprising, we did so much! We are off again tomorrow…

Kathryn Jansen, Head of Vaccine Research and Development at Pfizer.