Got home earlier this week. I use the term ‘Summer Progress’ on the suggestion of my friend Sue M – theoretically it was a holiday, but in fact we spent a week on tour in England and Wales – Hastings to Birmingham, then Barmouth on the mid-Wales coast via Much Wenlock, down to Bristol, and back to Hastings again.  The weather was fabulous, we saw many people who are dear to us, and visited interesting and beautiful places. But it was the longest we’d been away from home for well over a year, and we found it exhausting!

In Birmingham we stayed with old friends Sue and Alex T, and spent usual hectic two days seeing old friends – for the first time in many months.  We have now been away from Brum 11 years, and our old neighbourhood, Moseley, has changed so much. Moseley Village has become a dining and entertainment centre- so many restaurants, some of which seem to have changed hands every time we go. Loads of hairdressers, nail salons etc., but hardly any real shops – even Boots has closed. However, they do have a new small M & S. Apparently the centre of right-on fashionable living is now Kings Heath. The streets where we used to live are now riven by conflict between the Clean Air Campaigners who have succeeded  in getting a programme of road-blocking through the Council, and the rest, who see their roads clogged by traffic jams. Our old road, Cambridge Road, is one of those to be blocked off – we would no longer be able to drive up to Kings Heath High Street. The Clean Air campaign is being led by one Councillor Lisa Trickett (Hi Lisa if you are reading this…). When Grand-daughter Eve was at Kings Heath Primary, she frequently got into trouble for biting Lisa’s daughter…  don’t ask me why E chose that particular child, but there you go.  Battleaxe is not expressing any views on the traffic business, but she is pleased she doesn’t have to live with it… Anyway, if you want to read more about the Low Traffic Neighbourhood scheme, here is a link.

Then, on to Much Wenlock for a sunny visit to old friends Jan and John, before hitting the depths of Wales. What an awful lot of Wales there is – mile upon mile of hills/mountains, receeding folds of green dotted with white sheep.  At first, it was ‘just look at that view – how fantastic!’ but then more and more and more. A few highlights – open hillsides covered in bluebells, which was curious, I thought they only lived in woods. Also, purple patches of rhododendrons gone wild… obviously destructive and invasive, but very beautiful. Pics frm Google again. 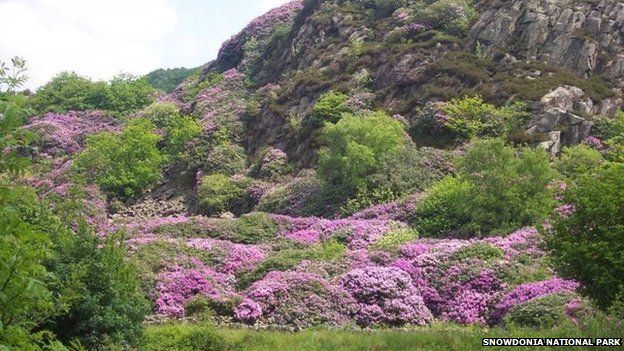 Arriving in Barmouth was alarming – it was half-term week and a heat-wave, and the town was absolutely heaving, mostly, we had been warned, with Brummies.  We edged our way through the thronged, jammed streets to our hotel, the Ty’r Graig Castle, an old Victorian castellated pile on the outskirts.  I had picked it because as readers know, Battleaxe is very fond of Victorian piles, the more quirky and eccentric the better… This one was quite small, originally built by Birmingham gun-maker WW Greener as a summer home in 1892.  Certainly quirky, but pleasant and helpful owners Mike and Trudy had tackled the Covid situation very effectively, with military precision. Spotlessly clean, all meals ordered in advance, at specified times… at breakfast each table had its own hot water and serving set up. We ate at the hotel every night to avoid the crowds down in town, and the food was great – very well cooked and plentiful.

Sitting on the terrace in the evenings with a G & T and looking out over the sea to the Lleyn peninsula, we could have been in Sorrento…

We had a round turret room – shown on the right of the TripAdviser photo above. Views across to the estuary from one window and to the Lleyn peninsula from the other side. Battleaxe would recommend the Ty’r Graig Castle – but as usual, not for lovers of modern minimalism!

Battleaxe has been to Barmouth before, in 1982 – nearly 30 years ago! I worked as a counsellor at Aquarius, an alcohol agency in Birmingham. Me and friend/colleague Tony took a party of ‘recovering’ drinkers to stay for a week in a house in Abergynolwyn, at the base of Cadair Idris,  near Towyn, and came to Barmouth for a day. Tony died suddenly a few years ago, and the drinkers tended to die young. It is sad to think that I am probably the only person left alive to remember that holiday. Here’s Battleaxe back then, looking virtually unrecognisable, on the beach in Barmouth, with Tony – a couple of the lads have crept into the corner. I can’t remember their names. Will anyone?

This time, Philosopher and I stayed three nights in Barmouth, and went on one lovely walk across the mouth of the estuary on a little ferry, then round the edge of the salt-marsh, which was covered in a carpet of sea-pinks, and back across the famous railway viaduct bridge to town. It sounds short but it was well over 7 miles including walking down and then back up to the hotel.

On closer inspection, and at quieter times of day, Barmouth was much, much better than our first impression – lots of interesting little shops, lots of nice looking pubs and restaurants – we only actually visited one – and of course an incredible location, tucked between towering hills and the sea. It would have repaid a longer visit and a good mooch in the shops – not to mention the many glorious walks round about.

However, on our walks through the town we did see some evidence that the natives might not always be friendly…

We visited Harlech – not so good. It turned out you had to book a visit to the Castle in advance, and we hadn’t, so that was that. Apart from the Castle, we couldn’t find much in the (very small) town to interest us.

Back in Barmouth, we did the Panorama Walk, apparently beloved of the Victorians, with even the remains of a Victorian pleasure garden. Given the ferocious heat, I chose it because the guide website said this one section of the walk was ‘gentle, suitable for older people and children’. Well, I don’t know who they had in mind but it turned out to be a long, lung-bursting Cornish coast-path style climb through spooky woods and up steep and uneven stone steps to the top of a hill, where indeed there was a panorama… we ate a picnic in total quiet on a bench with a fabulous view, all alone until a family of not-thin Brummies toiled up the path towards us, red-faced and panting – they had obviously read the same guide!

We drove right down the middle of Wales to Bristol. Winding roads with mile upon mile of beautiful, empty country.  It is not surprising that so many of the Welsh get all nationalistic – London must seem like the dark side of the moon. I tell you, some of those mid-Welsh towns on a Sunday leave a little to be desired – nothing open.  We stopped beside a lake/reservoir, very pretty and peaceful. Can’t remember where it was or what it was called… but we heard a cuckoo.

In Bristol, we stayed with step-daughter Anna and partner Gareth. It was good to see them for the first time in a year, and to admire their home improvements. They have survived the pandemic in good order.  We were talking about social media influencers…. given Hastings Battleaxe’s relatively high profile, I should probably be an Influencer, but don’t know how to go about it… I think you have to know the right people and post loads on Insta, Snapchat, Tiktok or whatever… I can’t be bothered. For example, we went for a walk and stopped at the Bristol Distilling Co., which has a very happening influencerish warehousy set-up in an industrial estate… and had some of their gin – very good. A real Influencer would have made more of that experience, but this one had even forgotten her phone to take a photo… here’s one off Google. Anyway, if any random Bristolians see this – unlikely – that gin place is well worth a visit.  Apart from that walk, we didn’t go out at all. We watched a telly programme last night ‘Statue Wars – one summer in Bristol’ featuring Mayor Marvin Rees. Bristol seems a very conflicted place – wouldn’t want to be in that Mayor’s shoes. A and G  live in Windmill Hill in Bedminster – seems a nice neighbourhood with Victoria Park nearby – when we walked through they had a live band playing – a rare thrill these days.

It is good to be back in Hastings. The cities we visited seemed far too complicated…