Yes, I know collecting spaghetti poodles and cats is insane…. but I did say I was going to concentrate on the things I enjoy. This post includes copy from an old post I wrote back in 2013, on a short-lived sister blog site to this one called Bombastic Battleaxe. BB proved to be too much work  and anyway, I can get plenty bombastic enough on here. But it would be a shame to lose the post into the dark depths of the internet.

All the poodles and cats were made in Italy in the 1950s and are surprisingly hard to come by. Philosopher says it is because most of them are on my shelves…
Presumably manufactured in bulk for the souvenir trade after WW2, they are roughly made from majolica/earthenware pottery, and break easily. They all have ‘Italy’ hand painted in black on the base.
The poodles mostly have coloured collars with bows.  Some are plain colours, some are floral painted, some hold baskets of flowers in their mouths, some pull little carts.  They are standing, sitting, playing, lying down… Some are lamp bases – I have two – and even bookends.
Most of these poodles have made their way from Italy to the US, via the post-war American military presence in Italy, or Italian-American migration and links. Given their fragility, many would not have survived their journey from Italy, either in the post or in a returning soldier’s luggage… 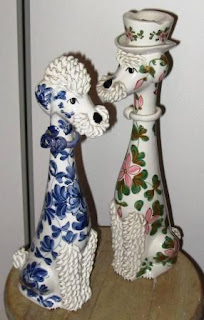 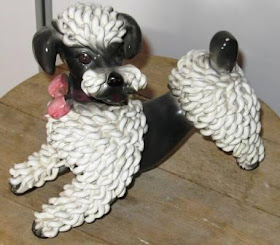 I got my first poodle from Snoopers’ Paradise in the North Laine in Brighton, around 2005. We used to love that place when we first went to Brighton, but when we have revisited, it feels like a shadow of its former self. Maybe it is still the same but we have grown older and our tastes have changed. I can’t now remember what appealed to me about  the poodle, but next time when we went back, they had another, and the grumpy bloke on the till, surprisingly, produced a third one from out the back. That was it. I now have…. wait for it…. about 80.  Now, I get most off Ebay – some quite cheap, under £20.00, from the UK, but others, at vast cost, from America. My most expensive import were the three joined together, pictured here.

These days I do try to be continent, and only get the rarest and the most special from the US. The only other collectors of these poodles I have come across are American.
So few come from UK shops or antique fairs, but ages ago I found two in the junk yard in Courthouse Street in Hastings, which I still think of as ‘poodle yard’…. I’m like a dog with a rabbit hole – I have a compulsion to revisit places where I once found a poodle, just in case another pops up… fat chance.  It is surprising there are so few, considering the vast acreage of junk and antiques we have picked through over the years, the fairs and boot sales… the antique centres, the auctions…. every time I arrive full of hope… but no.
I don’t really know why I like them. Often their thickly applied spaghetti curls are broken, or chipped. Some have repaired breaks. They are hand made and hand painted, so each is unique, with a different facial expression – usually degrees of cheerful gormlessness, and their spaghetti whiskers bristle with hopeful doggy enthusiasm.
I like the long-necked seated ones best – they are so classically 1950s.

So, what of the cats?

I didn’t even know they existed until our old friend Alan from Birmingham found one at an antique fair.  They are even rarer than the poodles.
However, the cats were clearly made by the same Italian factories, the style of spaghetti is the same, they have the same black ink writing on the bases, and they have the same collars. Their faces are very bizarre, with their huge, heavily made-up eyes and bouffant curls they look more like effeminate nineteenth century dandies than cats.  Spaghetti cats are more likely to wear clothes – striped jumpers are common, and they often, for some unknown reason, carry umbrellas.
I have found a bit of information about them: on this thread from an American antiques site.  It tells us this about the makers of both the poodles and the cats:
‘I believe that the concept of the “Spaghetti” pets probably had their origin in the studio of Teodoro Sebelin. Doro, as he was best known was born 1890 into a family of Ceramcist in Nove in the province of Vincenza (near Venice). He began working in his father’s studio in 1902. In 1921 he opened a studio with partners Zarpellon and Zanolli. ZSZ, in time, grew in international reputation. Sebelin was the modeler and sculptor for the firm. In all he created over 3,000 figurines. It didn’t take long for the other studios in the area to create their own versions. Among those from the Nove and Bassano regions were the Perdomello brothers, Agnostella and Dal Pra, Luigi Fabris and Ronzan. The town of Nove housed over two hundred potteries. With the success of the figurines in Nove and Bassano several figurine makers in Milan joined in. These included the families Cacciapuoti and the Mollica. (Cited from: https://www.antiquers.com/threads/spaghetti-cats.23069/)’

I would like to find out much more about these poodles and cats!  The thread on the site quoted above has given me the idea of creating a Facebook group for collectors. I have just done it – here is the reference if anyone wants to join!

A final quick note: There is another sort of poodle – the Japanese variety. These are far more  numerous and are very popular with American collectors. They have a similar history to the Italian versions, made by Japanese ceramic factories such as Napco and Lefton for American soldiers stationed in Japan to send/take home to their families at home. Many more of these have survived, as they were smaller, and made of tougher porcelain. I have a few, mostly gifts from others, but they are not my prime interest. This is what they look like:

Ruth Bader Ginsberg, US Supreme Court Justice and frminist icon, who died on September 18 aged 87. Described as a 'fearless and tireless champion of women's rights.