Or is it Cnut these days, or even Knut?  Who knows…. No, sillies I said CNUT.
We went for a breezy walk to Rye Harbour, and found a leather armchair washed up on the beach.  Hence Philosopher as Canute picture below…. 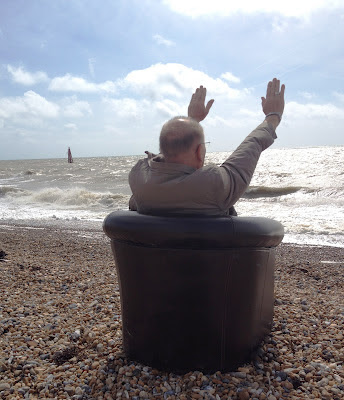 We were reflecting on the history we were taught at school.  He did History up to O Level, I did both O and A, but for both of us the things that stick most in our mind are images of ‘Romantic’ history we must have encountered when very young.  The picture of King Canute in his robes on his throne, while his courtiers fawned in the background.  Boadicia in her chariot with knives on the wheels, King Alfred and the Cakes, Hereward  the Wake hiding in the reeds (why?), Harold at Hastings, ‘Angles not Angels’ (What was that about?  Picture of slaves in a market place?), the Black Prince, Richard the Lionheart with his long blond hair, listening from his dungeon while Blondin plays the lute outside, Princes in the Tower…. butts of malmsey, surfeits of lampreys… on and on the images go, all in glorious technicolour, lots of goblets, wall-hangings, hounds, swords, robes, wimples…..probably not a word of truth in any of it ….
After our walk we called in for coffee at the lovely Avocet Gallery.  What an excellent place that is – nice people, great coffee and cakes and always a great range of pretty things to look at and sometimes buy.
It is a Blue Moon tonight.  I gather all it means is that every few years there are two full moons in one month, and nothing particularly mystic, or blue, for that matter.  For all that, we noticed the moon through the window last night, and it was very large, and very clear.  The sky looks quite blue…. 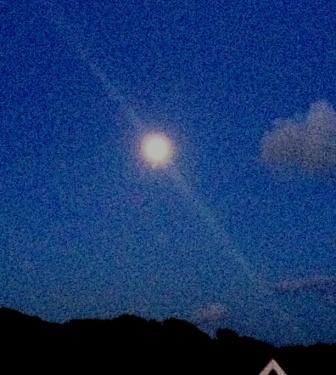 Philosopher keeps on telling me why it is so hard to photograph the moon and make it appear the same size as we see it. On this photograph you can see I have tried to blow the image up and it has gone all pixellated.  Our eyes are amazing things….